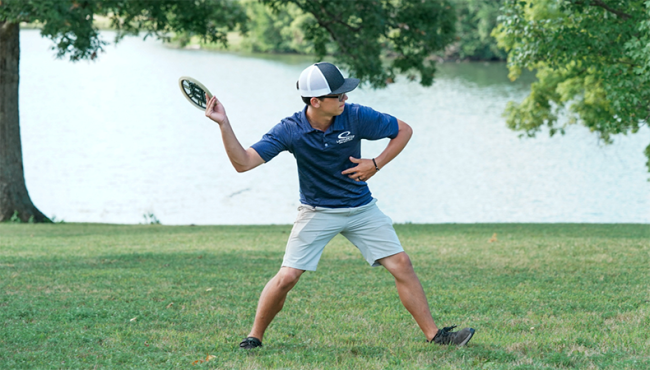 Emerson Keith's 12-under par performance at Lake Eureka has him alone atop the leaderboard after day one of the PDGA Professional Disc Golf World Championships in Peoria, Illinois. Photo: Alyssa Van Lanen

PEORIA, Ill.—Emerson Keith is at the top of the leaderboard after round one of the PDGA Professional Disc Golf World Championships, but he might not even be able to stay here all week.

The diminutive Texan is on the precipice of fatherhood, as his wife, Mackenzie, is set to deliver their first daughter in two weeks. That means he was on high alert Tuesday, focused on more than just the roped fairways of the par-63 Lake Eureka course.

“There is definitely a chance that I might have to leave in the middle of the tournament,” Keith said. “…We decided that if I was doing really, really well and it was a good business decision to stay here, then I would stay here and go home after the tournament. But if I was mediocre, then I would leave immediately and go home and be there for it.”

The 21-year-old was anything but mediocre en route to a 1091-rated 12-under par 51 that will keep him in Peoria until Wednesday, at least. Kevin Jones came out of the gates with a 1084-rated 11-under par 52 to land in second place after the first of five rounds, while James Conrad and Paul McBeth fired off matching 10-under par 53s to kick off the tournament in third. Chris Clemons rounds out the top five after his 9-under par 54 showing.

The performance was the highest-rated of Keith’s four-year pro career and comes on the heels of his victory at the Mid America Open two weekends ago.

"My goal was to come out here and make a statement, and I started off pretty well," Keith said. "I knew I've been due for a really good showing, and I've had good showings. I just keep having that one round that sets me apart from the guys who finish first, second, and third...Hopefully I can just keep going and stay up top this time."

Keith was perfect inside the 10-meter circle and said he mapped out a "safe" approach to the OB-heavy Eureka. That resulted in only two penalty strokes, and even when he did stray outside the lines he said he relied on the companionship of his friend and opening round cardmate Zack Johnson to help keep his head on straight.

Jones, meanwhile, found a friend in a new piece of equipment. He recently purchased a rangefinder and used it to size up his second shot on the 805-foot, par-4 14th. The shot landed in the basket for eagle.

“It was unbelievable, is the only words I can think to describe that throw-in,” Jones said. “…It’s the first time I used the information from the rangefinder. I got it at 128 yards. I threw it and I’m like, whoa, that flipped up and it looks like it’s going a little long, but it might flash the chains.”

The Arkansas native was the only competitor in the 193-player A Pool to keep a clean sheet at Eureka.

“Being bogey-free on the Lake Eureka course is amazing, and I couldn’t be happier to have achieved that,” Jones said. “I’m just going by the game plan, though, and the game plan is really good for me now. I practiced the heck out of this course.”

Jones has been widely viewed as one of disc golf’s brightest up-and-comers since he broke onto the scene at the 2017 United States Disc Golf Championship. Fresh off the first signature victory of his career at the Idlewild Open, Jones said he wasn’t focused on any outward expectations for his performance.

For Conrad, the round was about riding the highs and lows that Eureka can dole out with ease. He either birdied or went out-of-bounds on every hole until 14, but mixed in a 70-foot connection on the par-5 13th and a perfect day on the putting green.

“I felt happy without how I played today at Eureka,” Conrad said. “This is a challenging course. It’s not one I’ve played great on all the rounds I’ve played, by any means, but today I came out swinging.”

McBeth started off his fourth attempt at a fifth career world championship with a showing that, despite featuring a run of eight straight birdies, left him feeling uneven. He lamented the fact that he was leaving shots short of the pin—he only parked 6% of his holes—but led the field in circle 1 in regulation (72%) and capitalized on the opportunities with a 94% circle 1x putting conversion rate.

Those statistics, and his placement on the leaderboard, eventually led him to optimism.

“I feel like I play really good at these courses, so to shoot a 10 and feel like it wasn’t that good is promising,” McBeth said. “If the weather stays well—this is like an average round that I’ve been shooting in practice, so I wanna step it up a little bit more.”

Competition now moves down the road to Northwood Park, the wooded complement to Eureka. Despite it suiting his skill set, Conrad said he wasn’t sure the course would yield much separation on the leaderboard.

“I think it’s fun, I think it’s very challenging,” Conrad said. “I think it’s one of the more challenging courses we play on tour. I’m interested to see how the field attacks it tomorrow. I feel like the scoring might be somewhat flat out there.”

McBeth, though, saw an opening for the players who can play the cleanest. He said he has an entirely different bag composed for the course.

“I think Northwood, if you have a great round you can really gain strokes on the field,” McBeth said. “That course is—it’s demanding because you have to throw the tight lines, and then the rough isn’t forgiving at all…If you shank a shot it might take two to get out. There, it’s gonna be a completely different game.”

Keith, meanwhile, has all the motivation he needs to lay down another strong day.

“How cool would it be to say that I won a world championship the week before my daughter was born?”