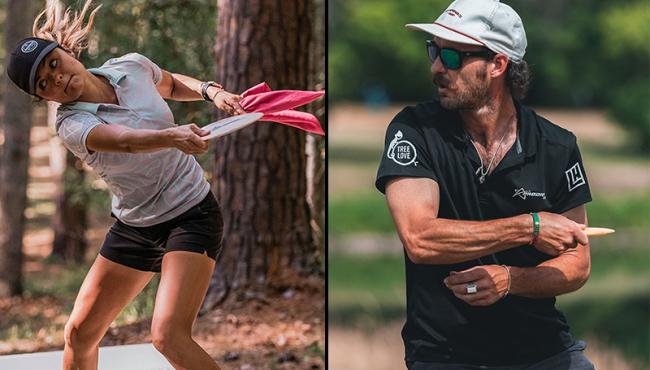 Grind is a major word used these days in professional disc golf.

It means that players, in a stacked and growing talent pool of competitors, must put in the work, hit the road and excel.

The word exemplifies this past season for Luke Humphries and Christine Jennings, who were recently named the 2019 PDGA Rookies of the Year. Both topped a competitive field of players that promise to be household names soon, if they're not already.

Humphries broke out in the Texas scene in 2018 and hit the road in 2019 for the first time, traveling coast-to-coast and cashing in 27 of 34 events. He finished the season strong, notching a 21st finish at his first United States Disc Golf Championship, a ninth-place finish at the Ed Headrick Disc Golf Hall of Fame Classic, the National Tour finale, and capped the year with an A-Tier win close to his Grand Prairie, Texas home at the 29th Veterans Park Open.

Humphries, who is often seen on the road with his famous disc golf dog, Hogan, is the second-straight Texan to win the award, following 2018 winner Mason Ford.

He finished with 32 points in the standings, 12 ahead of South Dakota’s Ezra Aderhold.

Jennings, a Dayton, Ohio native, balanced a full-time job while also managing – and excelling – on the course. She finished the 2019 season with 14 wins out of 29 events, including a third-place finish at The Rumble, wins at the Flip City Open and Seviren Lang Memorial and a ninth-place finish at the Ledgestone Insurance Open.

She finished with 101 points in the standings which was a sizeable lead over second-place finisher Valerie Mandujano and third-place finisher Heather Young, who recorded 65 and 35 points, respectively.

Since 2012, four names have been the story for the Player of the Year awards, Ricky Wysocki, Paul McBeth, Catrina Allen and Paige Pierce.

After grabbing his fifth World Championship, McBeth was named the 2019 Player of the Year for, fittingly, the fifth time in his career and the fifth since 2013. The latest accolade ties him with Barry Schultz as five-time recipients of the award, which began in 1984. Ken Climo has 10 POY honors.

McBeth triumphed in 13 of his 23 events in 2019, earning 336 POY points. It included a dominant stretch of nine wins in 13 events from late May through the Green Mountain Championships, including his fifth world title in Peoria, Illinois and a European Open crown.

Chris Dickerson, who had 25 wins in 44 events, finished second with 278 points and Eagle McMahon was third with 254 points.

The summer of 2019 was the summer of Pierce, who rattled off nine-straight wins at A-Tiers or above, including her fifth world title and the European Open crown. In total, Peirce finished with 14 wins in 26 events. 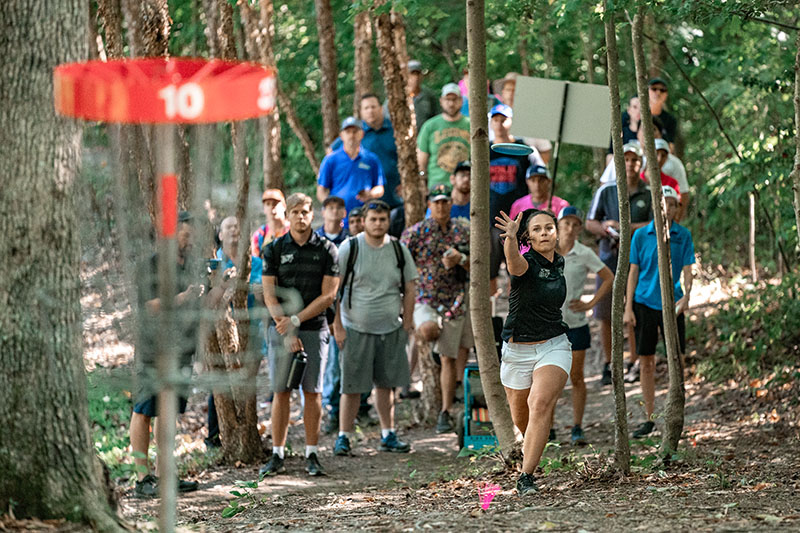 Kristin Tattar took the disc golf world by storm and is the 2019 European Player of the Year. Photo: Alyssa Van Lanen

2019 European Players of the Year

Domination Away From Home For Tattar, Lizotte

Kristin Tattar started her 2019 season on an absolute tear back home in Europe.

Then she brought that dominance stateside.

The Estonian native grabbed seven wins in her first eight tournaments in Europe and then in a two-month run in the United States, Tattar showed that she is a global force to be reckoned with. Tattar finished sixth at 2019 Worlds and followed that up with back-to-back second-place finishes at the Delaware Disc Golf Challenge and the MVP Open. She grabbed a win at the Canadian National Disc Golf Championship by seven strokes over Pierce and followed that two weeks later with a win at the United States Women's Disc Golf Championship with a 984-rated finishing round to best Pierce by four shots after the pair entered the finale tied atop the leaderboard.

Simon Lizotte, meanwhile, stayed in the mix at all of the big tournaments in 2019 with podium finishes at the Memorial, Santa Cruz Masters Cup, Portland Open and the MVP Open to go with a handful of top-10 finishes at the rest, including eighth at Worlds.

Albert Tamm, Jesse Nieminen and Väinö Mäkelä rounded out the top four in the European standings. 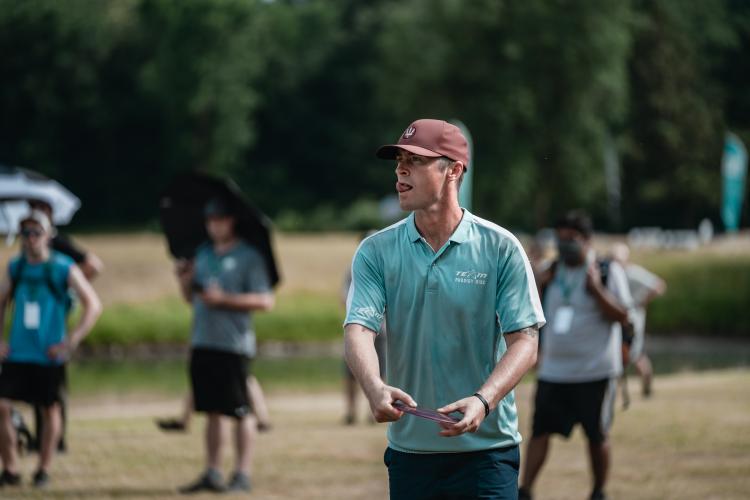 Cale Leiviska is known for staying positive on the course and is the 2019 recipient of the Bob West Memorial Sportsmanship Award. Photo: Alyssa Van Lanen

Leiviska Has Impact On, Off Course

Cale Leiviska is a veteran of the sport and a longtime staple on the tour, often seen with a big smile and upbeat disposition.

Leiviska’s focus has shifted to the course design aspect of the sport of late but was on the road early in 2020 before the coronavirus shutdown impacted the sport. That, in turn, allowed Leiviska to prepare, hone and debut his latest course design project, the Airborn Disc Golf Preserve. The two 18-hole tracks on the Mississippi River in Clearwater, Minnesota debuted on the pro circuit in early July, the second Disc Golf Pro Tour stop after action resumed this season.

Through it all, Leiviska has been a sportsman and was honored as the 2019 Bob West Memorial Award for Sportsmanship.

Sportsmanship is defined as fair and generous behavior or treatment of others, especially in a sports contest. The Bob West Memorial Award is awarded annually to a PDGA member who exemplifies sportsmanship on the disc golf course and during competition, observes the rules of plays and wins or loses with grace. Candidates for the award are nominated by PDGA members.

“I’ve known Cale for many years. He is always a good sport, always upbeat and positive, regardless of how he’s playing. I have never seen him lose his temper on the course (or elsewhere). He is very popular here in his home state. He is always smiling; always happy it seems. He recently installed two new courses here and they are already getting rave reviews,” said Hall of Famer Joe Feidt, who nominated Leiviska for the honor.

Other 2019 PDGA Award Winners Include:

Brent Hambrick Award for Tournament Director of the Year

Volunteer of the Year

Newman has been involved in a number of areas in the sport in New York, where he serves as the PDGA State Coordinator as well as designing and assisting with local courses. He is an inductee in the New York State Disc Golf Hall of Fame. Newman serves on the PDGA discipline and environmental committees, where he is leading the Throw Green initiative. Newman also works with Throw Pink and is an ambassador for running disc golf events for women.

Senior Player of the Year

Stanley competed in 19 tournaments in 2019 with a number of wins, none bigger than an Amateur World Championship in Masters 60-plus. She averaged well about her rating in all five rounds in York, Pennsylvania. She also recorded a second podium finish in a Major in 2019, finishing second in the Masters 40-plus at the 2019 United State's Women's Disc Golf Championship in Spotsylvania, Virginia.

Lyksett is a co-founder of the Educational Disc Golf Experience (EDGE), who retired in recent years as an Educational Specialist to focus on time with family after being diagnosed with a progressive, incurable neuromuscular disease called Myasthenia Gravis.

Lyksett has had a Frisbee intertwine his entire life only finding the game of disc golf later after time as an extreme rock climber, touring percussionist and leading expert on adaptive technology in adaptive education.

Jon and his wife, Marlene, designed and installed a disc golf course in their hometown within their first year of discovering the game. Lyksett was the educational driver for organizing the EDGE program and aligning the components that would create the National Physical Education standards-based curriculum and getting the EDGE teaching curriculum and instructional DVD.

With the Educational Disc Golf Experience having now exposed disc golf to millions of our youth, Jon Lyksett's impact upon the growth of educational disc golf is legacy. Lyksett has also designed 21 courses in five states that when combined with his contributions to the PDGA as a former board member and his work within the Educational Disc Golf Experience will continue to impact the new players he helped create for years to come.

Special awards, as bestowed by the PDGA Board of Directors, recognize contributions to the sports and the PDGA.

The PDGA Staff and Board of Directors thank Conrad for his invaluable contributions to the sport of disc golf and the PDGA organization.