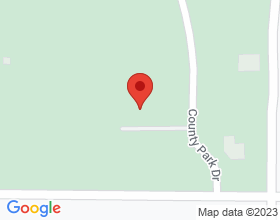 Camping: no
Facilities: yes
Pay to Play: no
Handicap Accessible: no
Private: no
Tee Signs: yes

22 miles south of Kalamazoo on US 131. Take US 131 to Broadway (Meijers Grocery Store). West on Broadway 1.1 miles to park entrance on right near house just past Roberts Rd. 1st tee near bulletin board.
First Tee: ()

This course has no photos.

It was a beautiful August day when 4 friends and I decided to head north and forgo playing at one of the 5 near-by courses we frequent in order to try out something new. The lack of cars in the parking area when we arrived should have signaled trouble but we ignored the omens and carried on giddy with our luck of having the course nearly to ourselves. The first few holes were great with fun shots and nice signage and directions. However somewhere around holes 8-10 things started to go awry. There is a fine line between challenging and pain-in-the-*** and the first half of this course is solidly on the challenging yet fun side. The second half, however, sprinted across that very fine yet important line and ran around like a crazy naked hobo on the other side. The fairways suddenly became about half as wide as they had previously been and the grass and weeds on the side of the fairway which was about ankle to calf height in the first half of the course was now knee deep minimum with some holes having weeds up to your chest and shoulders. The course got worse the farther it went. Most of the time it looked like they had just stuck a drunk guy on a lawnmower and told him to get from point A to point B however he wanted. The layout of each hole was no where close to what the map we had printed online said, and there was absolutely no signage after hole 9. We ended up skipping hole 17 because the "fairway" was now wide enough for only one person to walk on and had shoulder height weeds along about 450ft of the 510ft twisting turning length of it. I have never seen a hole I would call unplayable until reaching hole 17 on this course.

We ended up calling it a day after that and didn't play hole 18 either. So for 16 holes it took 5 of us almost 3 hours (we normally play through a course in around an hour and a half), we lost 2 discs and the lowest score of our group was a +16 and the highest being around +26. Keep in mind that after hole 9 the scores ranged between +3 and +7.

If properly maintained or possibly in early spring this course has the potential to be one of the best courses in the southern Michigan/ northern Indiana area. But as is in the summer the second half of the course is the worst thing I have ever played.

I gave it three chains because the first half of the course was great, and the second half has a lot of potential and might be fantastic earlier in the year before the grass and weeds grow in.

Cons:
Second half is poorly maintained to say the least.
Lack of any signage on the second half is made worse by the fact that there are paths going all directions for hiking so you are never sure which way to go to find the next hole as they are spaced a good distance apart.
Very tall and close in Grass, weeds, brambles on most of the last half of the course.

Either try coming in the spring or just play through the front 9 during the summer. Throw a neon colored disk as it helps a lot on the back nine in keeping track of where you throw (pink or orange stand out best against the colors present in the plants here.